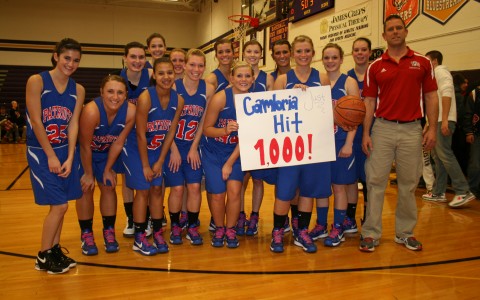 The Britton Deerfield Patriots and Whiteford Bobcats both battled their way into the second round of the district tournament. Whiteford avenged a district defeat to Summerfield from last year and the Patriots sealed a victory over Erie Mason and Cambria Handy broke the 1,000-point barrier.

It was sweet revenge for the Whiteford women’s varsity basketball squad Monday night, Feb. 25. The Lady Bobcats were knocked out of the 2012 district tournament by the Summerfield Bulldogs on Whiteford’s home court. A year later, it’s a different story as the Bobcats bullied the Bulldogs for a 59-35 first-round win.

It was a special night for the Britton Deerfield varsity women’s basketball team Monday night. The Lady Patriots locked up a 50-31 first-round victory in the district tournament over the Erie Mason Eagles, as Cambria Handy scored her 1,000th point in just her junior season.