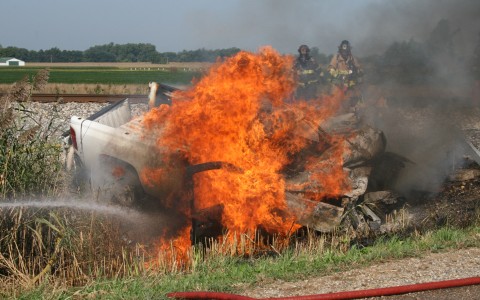 RIDGEWAY TWP. — Looking at his cell phone allegedly caused  a 53-year old Hudson man to  crash the pickup  he was driving into a moving train last Tuesday on Blissfield Highway south of Pocklington Road.

Shortly after the vehicle crashed into the westward-moving train, it burst into flames.  However, the driver was able to escape the vehicle before it  caught fire. John Koser was taken to the hospital from the scene.

According to Michigan State Police Trooper Bill Strouse, Jr., at the scene, Koser received a citation.