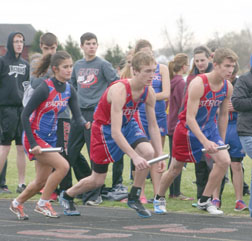 Britton Deerfield and Blissfield had a busy week in track, while Whiteford was on spring break.

The temperatures may have been chilly, but the Britton Deerfield women’s track team heated up the track April 22 sweeping a double-dual meet with Clinton and Morenci. The Patriots were the overall winner in both the sprint relays. Sophomore Jaymz Gibson was a double-winner in the 400 and 200 meter dash events. Cambria Handy won the shot put and Janessa Handy the long jump. Mariah Gotz won the 100 meter dash. “We are doing really well,” BD coach Bob Beckey said, “with a little better weather we should see some peak performances in the next couple of weeks.” BD Women 75 Morenci 58

For the complete stories and individual results, please see the April 30, 2014, edition of The ADVANCE.