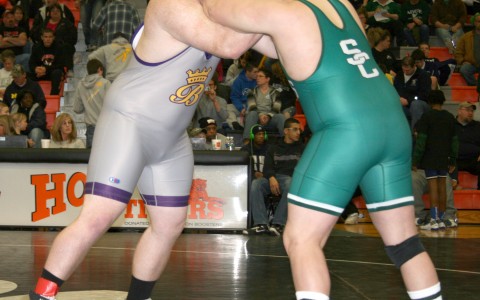 The Blissfield varsity wrestling squad took seven contenders to regional competition at Hudson Saturday, but only one advanced to state. Dan Barta and Thomas Jackson both found victory on the day, but were unable to duplicate it and advance on to state competition.

Senior Dylan Thompson was victorious through the first two rounds of competition, before being matched up with 285-pound powerhouse Zach Rieger from host Hudson. He muscled out a 7-6 decision over Homer senior Tyler Prater who entered the tournament with a 35-3 record on the season. The road seemed to get just a little bit rockier for the Royal as his second match was against Gabe Beaubien of Sand Creek who defeated Thompson a week earlier in district competition. Thompson met the Aggie head on, however, and came out with a crucial and nail-biting 3-2 decision in overtime to guarantee him a trip to the individual state tournament at the Palace of Auburn Hills on Thursday, Feb. 28.