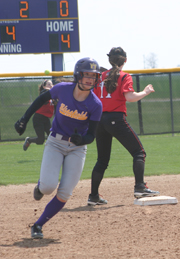 The Lady Royals did not slow down from there as the schedule featured them at home for their Saturday Blissfield Invitational. Blissfield welcomed Adrian, Pickney and Beal City to the invite. The Royals started off the day of round-robin play against the Adrian Maples.  The final score resulted in a 14-4 Blissfield win. In the second match-up of three on the day, the Royals came out on top, winning a close contest 4-2. In the third and final game of the invitational, the home team got back to powerhouse game play and annhilated Beal City 13-3, for the home sweep.

On Wednesday, April 30, the Lady ’Cats traveled to Summerfield to take on the Lady Bulldogs. With a large roster and upperclassmen providing leadership on the field and in the dugout, the visiting Bobcats dominated the match-up, shutting out Summerfield 9-0.

The victorious Bobcats hoped to ride on the momentum of the shut-out Summerfield win and take that into a Monday match-up against league opponent Morenci. Facing off against another Bulldog team, the Lady Bobcats could not pull out the home diamond win, as they fell to the Lady Morenci Bulldogs 7-6 in extra innings.

The Britton Deerfield Lady Patriots slugged their way to three victories this past week. The ball club defeated Whitmore Lake in both games of a double-header April 30 and split a double-header contest Saturday in Hudson.

The Patriots trounced the Trojans in the first game 14-4. The second game was considered a non-league game. The Patriots won 9-3.

BE defeated Hudson 8-4 in the first game, but fell to Hudson 5-3 in the second.

For the details on these games and stats for each, please pick up a copy of The Advance’s May 7, 2014, edition.