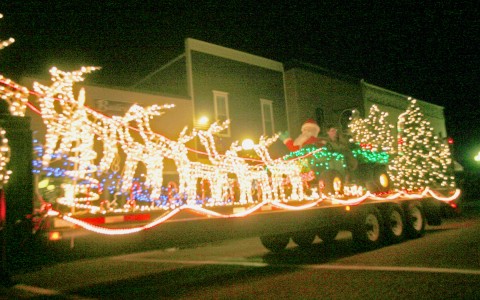 Some new attractions will light up Lane Street when folks gather for the 13th annual Blissfield Parade of Lights Saturday evening. The event is organized by the Blissfield Downtown Development Authority/Main Street Program. This year leading the parade of floats decorated in holiday style and hopefully with bright Christmas lights, will be grand marshals Abe and Zamira Elmazi, owners of Blissfield Coney Island and the B-Town Bar & Grill. The Lane Street business is also this year’s parade sponsor. They will be traveling the parade route in a decorated float to lead the procession of holiday-themed floats and units through the downtown.

This year’s organizers have a goal of 50 entries in the parade.

“I think it is going to be nice. We have had a good response so far,” committee coordinator Gwen Dusa said of the entries that have signed up so far.

Friendly and familiar faces such as Miss River Raisin Festival Charlotte Squires and Britton Deerfield homecoming queen Anna Prielipp will both take part in the festivities. Members of the Blissfield High School Marching Band will be spending part of their holiday weekend performing holiday favorites for parade-goers to enjoy. While one expects to see fire trucks, tractors, combines and other farm machinery lit up and decorated in a Blissfield parade other new attractions and entrants will be a part of this year’s parade.

“This is the first year the Shriner Jeepster units are coming,” Dusa said. “I also have Paws coming down from the Detroit Tigers,” she said. Paws is the mascot of the major league baseball team.

Interested participants can find registration forms at www.blissfieldmainstreet.com or contact Dusa at 517-486-3671. Parade entries will be judged by Blissfield Village president Mike Gunter, DDA chairperson, Jeff Juby, and Noel Eisenmann representing Michigan Agricultural Commodities. M.A.C., The Andersons and D & P Communications are all trophy sponsors. Three awards will be given out, one for best use of lights, most festive and most creative.

And of course the grand finale will be Santa and Mrs. Claus bringing up the end of the parade. The parade begins at 7 p.m. Parade participants will begin lining up behind Blissfield High School at 6 p.m. The parade route will follow Lane Street through the downtown then turn east on U.S. 223 then back south on Giles Ave. and return to the school.

Copyright 2012, River Raisin Publications, Inc. For Melissa’s complete story and an array of holiday happenings in the annual Holiday Lifestyles section, please see the Nov. 21, 2012, edition of The ADVANCE. Or call 517-486-2400 to subscribe for weekly delivery.