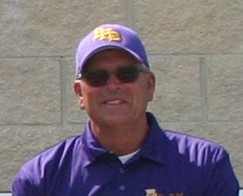 “Denny is one heck of a coach and an even better person. He’s the best, that’s as simply as I can put it,” said former Blissfield head football coach Ron Estes.

Thompson’s career in the purple and gold has been a decorated one, from his years wearing the Royal uniform, to his years teaching and coaching those who carried on the Royal pride.

A 1969 graduate of Blissfield High School, Thompson was no stranger when it came to the football gridiron, the baseball diamond or the basketball hardwood. He garnered captain’s honors, all-state and all-league awards and the respect of his teammates and coaches. Thompson’s Royal career is such a decorated one, he has earned himself a place in the Blissfield Hall of Fame and will be inducted with the 2013 hall of fame class Sep. 14. Thompson continued his athletic success with a baseball career at Adrian College, where he also earned his teaching degree and majored in physical education with a minor in biology.

Having success in any sport that included his name on the roster, Thompson said he could never choose a true favorite. “What ever sports season it was, that’s what I liked,” he said.

Thompson himself would never acknowledge himself as anything special. He maintains a humble attitude and a simple philosophy. “What you are, is what you do, with what you’ve got.”