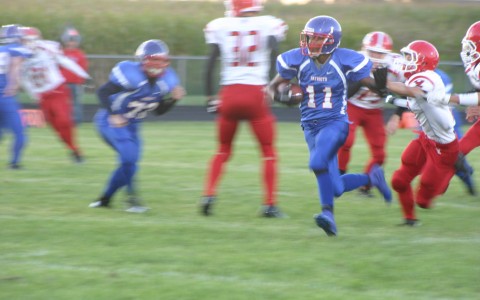 On the first cool Friday night of the football season that fell on Friday the 13th, skill and drive with a little bit of luck resulted in a mixed bag of gridiron results this week.

Britton Deerfield raised its season record to 2-1 Friday night with a big football win over visiting Whitmore Lake, 39-22. But the win was tempered with concern for Patriot quarterback Cody Meinert, who was injured after passing for two touchdowns and rushing for two more.

Tri-County Conference fans called the Whiteford-Clinton football matchup the league game of the week as the two unbeaten laid their records on the line on Friday the 13th. The night proved an unlucky one for the Bobcats who found themselves on the short end of a 33-8 loss to the Redskins and saw their 2-0 record fall become a 2-1 tally at the end of the evening.

And the Blissfield-Hudson rivalry continues. After Hudson had big scores and ensured their opponents had none to begin the season, the Blissfield Royals gave the Tigers all they could handle Friday night. The Royals still haven’t won a game this season, but as they hosted Hudson, they kept it nail-biter close going into the fourth quarter down by two, 14-12, before the Tigers scored another touchdown and PAT to seal a 22-12 victory on the road. However, the Royals scored two touchdowns to spoil LCAA foe Hudson’s 2013 shutout record while showing a much-improved defense and offense.

By the way, it was Blissfield Athletic Hall of Fame introduction night at the Blissfield game with the actual induction dinner Saturday night, Sept. 14.

For the complete stories and photos from all these area high school football games and the Blissfield Hall of Fame event, please see the Sept. 18, 2013, edition of The Advance.