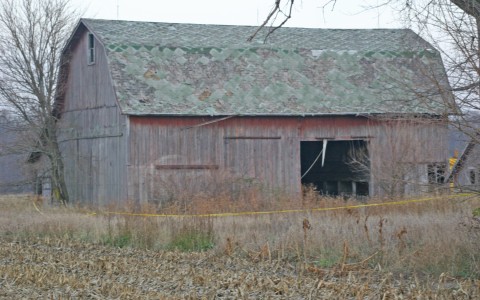 PALMYRA – The partially decomposed body of a woman found by a man spreading lime in a Palmyra Township farmer’s field Friday afternoon has been identified as the woman missing from Sylvania since mid-September.

Lenawee County Undersheriff James Anderson confirmed Tuesday that dental records provided for Catherine A. Sackrider had positively identified the remains as the 59-year-old Indiana woman who had been missing from Sylvania, Ohio.

The victim, who lived in LaGrange County, Ind., had been reported missing Sept. 24 to the LaGrange County Sheriff’s Office after she allegedly failed to return home from visiting her daughter and son-in-law the Toledo area. Her vehicle was later found abandoned in a park behind the Starlite Plaza on Monroe Street in Sylvania. She was reportedly last seen Sept. 18 after visiting her daughter in the Toledo area, according to a news release from Lenawee County Sheriff Jack Welsh.

Her body was discovered near the back corner of an unused wooden barn in the 6000 block of Scott Highway.

According to Welsh, Lenawee Central dispatch initially received a call reporting the body found at 1:20 p.m. Nov. 9. When officers responded, they found the partially decomposed remains of what they believed to be a woman.

An autopsy conducted Saturday, Nov. 10, at ProMedica Bixby Hospital had confirmed the body was that of a woman, but did not establish identification, Anderson had said Monday. Police had believed it was a women based on the clothing she was wearing. Police are awaiting laboratory results in hopes these may explain how the woman died.

The cause and manner of death are also key elements in the investigation and were undetermined in the autopsy, according to Welsh. But he had earlier said authorities do suspect foul play. The location of her death also remains unknown, according to the Tuesday Welsh news release.

The Lenawee County Sheriff’s Department had first notified the Sylvania Township, Ohio, Police Friday afternoon after a sheriff’s detective remembered seeing a recent report about a missing person from their area, Welsh said in a weekend news release. That missing person was Catherine A. Sackrider.

PALMYRA — A King James Bible that every Palmyra Mason since 1866 has laid their hands on when they were sworn in to the lodge will never return to its rightful owners. An anonymous tip to the Lenawee County Sheriff’s Department in October led police to the suspect who they say burned the Bible after stealing it in July of 2011 along with some other ornamental fixtures from the Palmyra Masonic Lodge on Lenawee Street in Palmyra.

Ronald Morton Huskins II, 22, Blissfield, was arraigned Nov. 8 in Lenawee County District Court on charges of arson of personal property $200 or more but less than $1,000, breaking and entering of an occupied dwelling with intent and larceny in a building. According to a police report the Bible was an 1859 King James Bible.

Mason Dave Bailey said it was dedicated by the ladies or wives of the Masons in February of 1866 shortly after the lodge was chartered.

“It has been used for every meeting or every function we have had since then,” Bailey said. “Every guy who has gone into that lodge has laid his hands on that Bible to get sworn in,” he said. Also stolen were some ornaments that formed a plumb bob, square and level.

Huskins pleaded not guilty at his arraignment. He will have a preliminary examination on Nov. 19.

Blissfield’s new Downtown Development Authority Director/Main Street manager Patricia Rayl brings experience from working with some successful communities and with the Main Street program in Michigan. She also has a love of historic preservation that she sees as a good fit for her job in the village of Blissfield. The DDA/Main Street Program hired Rayl who officially took the helm of the management position on Nov. 5.

Rayl quickly was immersed into the activities of the Blissfield DDA/Main Street Program with the annual Yuletide Cheer event that drew many visitors and shoppers to downtown over the weekend.

Rayl replaces Michael Sessions who took a new position after a two-year stint in Blissfield.

Most recently Rayl was the Downtown Market manager of the Jackson Downtown Development Authority Farmers Market. Rayl has done internships with both the cities of Albion and Marshall where she also became acquainted with the Michigan Main Street Program and many of the people who work with it on the state level as well she said. Rayl has both an undergraduate degree and a masters in public administration from Eastern Michigan University.

Copyright 2012, River Raisin Publications, Inc. For the rest of this story and many other news stories including the Britton Deerfield Board of Education meeting, notes from Deerfield Village’s monthly meeting, lots of Yuletide and Veterans’ Day photos, please see the Nov. 14, 2012, edition of The ADVANCE. For home delivery, please call 517-486-2400.

PALMYRA – A farmer spreading lime in a Palmyra Township field Friday afternoon made the gruesome discovery of a partially decomposed body behind a dilapidated wooden barn.

Lenawee County Sheriff’s detectives were on the scene before 2 p.m. According to Lenawee County under sheriff James Anderson, a partially decomposed body of what they believed to be a woman was found near the back corner of barn in the 6000 block of Scott Highway.

The barn is about 50 yards off the road on the east side about 100 yards north of Station Road. Anderson could not positively say the body was that of a female or what age or race the person was. Police could not confirm foul play Friday evening due to the condition of the body. But they believe it has been there for some time.

Six very large spools of yellow field tile sat in front of the barn near the road that had been dropped off possibly a week ago, Anderson said. Another trailer with some tile material was on the south side of the barn.

The body was discovered near the north end on the back side. In the field next to the barn, a tiling machine also stood. There were no homes close to the vicinity where the body had been dumped. There was a field drive back to the barn, but the property in front of it was overgrown with grass and weeds. There was also another aging wooden structure to the south of the barn.Approximately seven members of the Lenawee County Sheriff’s personnel were on the scene as well as a trooper from the Michigan State Police.

Anderson said there would likely not be much information to tell until after the autopsy reports came back and if and when the person was identified.

The Michigan State Police mobile crime lab from Lansing arrived on the scene just before 5:30 p.m. to assist with the investigation.

The missing woman had reportedly been visiting relatives in Sylvania Township, but hasn’t been seen or heard from since she allegedly left to go home on Sept. 18. Her vehicle was found abandoned days later in a Sylvania Township park just south of Monroe Street near the Starlite Shopping Plaza.

– By Melissa Burnor, The Advance. Please see the Nov. 14 edition of The Advance for this story and more. Copyright 2012, River Raisin Publications. 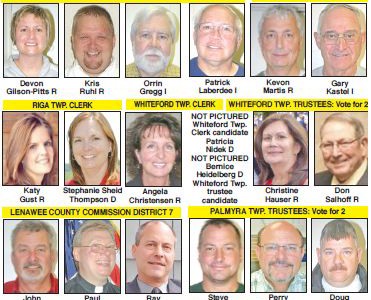 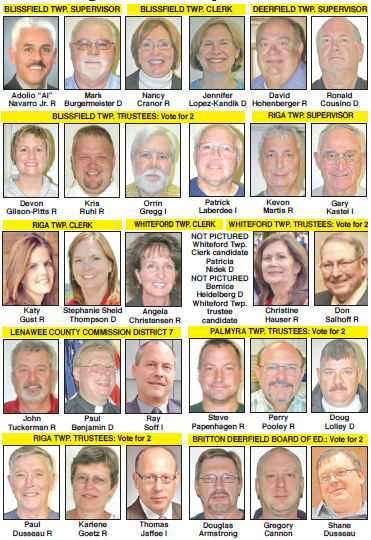 (EDITOR’S NOTE: Lenawee and Monroe County residents will join the rest of the United States in the democratic process by electing representatives next Tuesday, Nov. 6, from the grassroots level right up to the U.S. president. In today’s Advance, please find a Voting Guide to provide information on candidates and issues at the state and national level. Here, we have information on local elections. Candidates were provided with a questionnaire. Their answers follow:)

Blissfield Twp.
Blissfield Township residents will elect a new supervisor and will also choose a candidate for township clerk and two trustees in the General Election. Only treasurer Karen Baldwin is unopposed after winning the Republican primary election in August.
After winning the Republican primary against two other candidates including incumbent supervisor Lew Bowman, Adolio “Al” Navarro faces off against Democrat Mark Burgermeister for the supervisor position. Both men currently serve as trustees on the Blissfield Village Council. Navarro’s term expires in November, while Burgermeister’s would expire in 2014.
Four candidates are running for two trustee positions on the board. Incumbent Reed Mapstone did not run for reelection after serving nearly four decades on the township board.
Orrin Gregg, who was appointed in March to fill out the remainder of Jason Fischer’s term on the board is running as an independent candidate. Also running are Pat Laberdee, also an independent, and two Republican candidates, Devon Gilson-Pitts and Kris Ruhl.
Pickup an Advance today to read more…

A slate of 15 candidates for the Blissfield DDA/Main Street manager position has been narrowed down to three finalists who will face public interviews this evening (Wednesday) at the Schultz-Holmes Memorial Library. The DDA/Main Street board may have two additional members take part in the interview process as well.
Blissfield Village Administrator Jim Wonacott said it is likely the DDA/Main Street board will interview two men and one woman for the position now open due to the resignation of former manager Michael Sessions.
Village president Michael Gunter who is also part of the board was not quite certain at the village council’s Monday night meeting whether or not all three candidates had been notified yet that they were in the final running for the position.
The village council approved…

The Schultz-Holmes Memorial Library in Blissfield, will present homebuilder, engineer, and environmental advocate Frank Baker, founder of Riverbend Timber Framing and Insulspan, Inc., as part of its Phyllis Robertson Program Series at 7 p.m. Thursday.
Baker will speak on “Green Building,” a construction practice which seeks to minimize the environmental impact of both the process and the finished structure.
All library programs are free and open to the public.
Through Baker’s career as an engineer at General Motors, founder/owner of Riverbend Timber Framing and Insulspan and currently as he is representing PFB Corporation on a number of national and international trade associations and non-profits, there has been a common thread, concern for the environment. Frank was building “Green” before the term “Green Building” came into common use to describe homes built to minimize the impact on our environment. He has also worked at the community level in Blissfield to encourage Green practices in many local endeavors. Frank and his wife, Brenda, recently completed a Certified Green Cottage in Lakeside, Ohio and built a very green home in Blissfield nearly 20 years ago, as well as a previous green home 32 years ago before there were Green Certification programs. Riverbend and Insulspan have produced thousands of green homes over the last 33 years and continue to do so today.
The library’s Phyllis Robertson Lecture Series was made possible by a gift from the estate of Phyllis Robertson, a local writer and photographer, as well as a long-time benefactor to and advocate of the library. Programs this fall will include a mediation workshop and a holiday card making workshop.