For the first time in Blissfield’s 19-year history it has an official flag. Five members of the village council unanimously approved the new banner at the April 27 meeting. Trustees Art Weeber ad Mike Gunter were absent.
Using design elements chosen last year by Arnett Muldrow and Associates as part of the Blissfield Main Street image and branding exercise. The Main Street Program was the recipient of a branding services grant from the Michigan Main Street Center.
The flag, a dark blue, says “Blissfield” in scripted lettering in a yellow across it. It includes the newly adopted log that shows a sunburst with farm fields on it .
Blissfield Village Administrator Jim Wonacott said the village will initially have a flag for both the council chambers and one to adorn the flagpole in front of the lane Street village office. Plans are to have the flags ordered soon.
The rest of this copyrighted Blissfield Village Council story by Melissa Burnor appeared in the May 6, 2015, edition of The Advance. 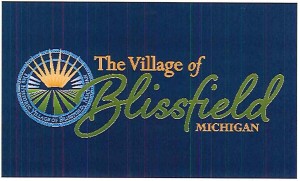