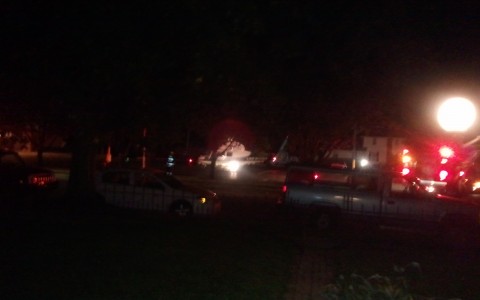 A 57-year old Tipton man was arraigned Monday on charges of felonious assault after allegedly cutting a man’s neck with a knife on the sidewalk in the 100 block of South Lane Street early Saturday morning.

Police and rescue crews responded to the west side of the street at 1:43 a.m. Saturday to a report of an assault. According to witnesses on the scene, a 31-year-old Blissfield man later identified as John Burtle, allegedly had his throat slashed by suspect Bradley Bences. Blissfield Fire Department responded to the scene quickly and took the Burtle to the parking lot of the Blissfield State Bank on Jefferson Street where he was airlifted to a Toledo hospital.
Blissfield Fire Chief Gary Crist said Burtle was talking and conscious when ambulance crews loaded him into the chopper.
Blissfield Police Sergeant Jacob Wagner said the altercation allegedly occurred after the two men may have  had contact earlier in the evening.
A woman across the street from the crime scene allegedly witnessed a stockily-built,  possibly bald man with a goatee wearing a flannel shirt, run through the mini park and into the area between The Advance and Bill’s Service on Newspaper Street.
A large pool of blood covered the curb and part of the sidewalk on the west side of the street. While several people had gathered on the sidewalk, a woman dumped a large pail of water on it to wash it away. A trail of blood droplets could be seen on the pavement and sidewalk through the minipark and on parts of Newspaper Street.

Police checked out the area but did not find the suspect there.