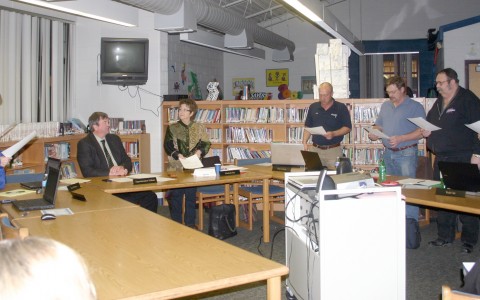 It was an historic evening Thursday for the Britton Deerfield Public Schools. All seven members of the newly elected board of education were given the oath of office.

“It is historic,” Britton Deerfield superintendent said. After serving since July 2011 as an appointed board the board sworn in that evening was the first elected Britton Deerfield Public Schools board of education. “We are unique in the fact that we elected all seven at one time,” Pelham said.

Most school boards elect one or two members in each election cycle. Because Britton Deerfield was a newly formed school district in 2011 all board members had to be elected to the board at the next possible election that was in Nov. of 2012. All seven appointed members retained their positions.