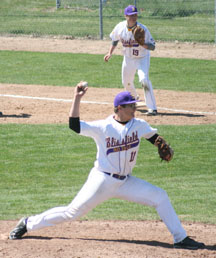 BLISSFIELD — The Blissfield varsity bats have been swinging non-stop in this past week of Royal baseball action. On prom day Saturday,April 26, the Royals marched onto their home diamond and let the bats fly against the University Liggett Knights. The Royals were led by sophomore Chase Lievens in the first of two against Liggett. Lievens recorded five RBIs in the first match-up en route to a high-scoring 15-10 victory.

Another victory in the second game eluded the Royals as they fell to Liggett 12-9, unable to perform the double-header sweep.

BRITTON DEERFIELD — A three-run homerun by D.J. Gotz in the double-header with Lenawee Christian April 21 put the Patriots on top of the Cougars 7-1.

The Patriots lost the first game 4-2 but came roaring back in the second game defeating Lenawee Christian 7-1.

The Whiteford Bobcats were on spring break last week. For the rest of the stories on BD and BHS baseball, please see the April 30, 2014, edition of The Advance.