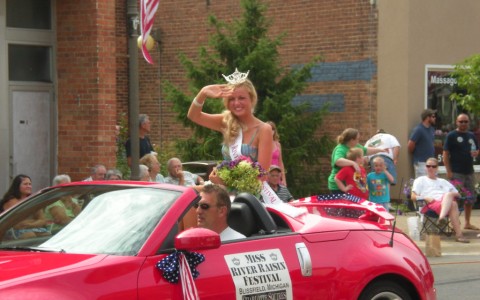 When the 30th Annual Blissfield River Raisin Festival returns to Bachmayer and Ellis parks on both sides of the River Raisin in Blissfield July 10-13, there’s a big change in the schedule: A shift to a pumped-up Thursday, Friday and Saturday, rather than the traditional Friday-Sunday schedule. The reason; the popularity and growth of the Thursday evening events.

“We have had Thursday night activities for a few years now with the carnival actually opening on Wednesday — which it will again this year,” Fetzer said. “Our Thursday attendance was growing, but Sundays were dropping off.’ She explained that the growth of Thursday afternoon and evening is seen as an opportunity to add even more activity on Thursday night including acts on the main stage and the Car and Bike Show — with a free “drive-in movie” to follow as well as the opening of the festival beverage tent for Everyone’s Homecoming Party, bingo, Princess Walk and big entertainment on the Pavilion Stage, the Dockside Deck and the Tugboat Stage for kids. The carnival will be in full swing, too. “We’re bringing it Thursday night!” she said.

The committee has been discussing concluding the festivities with a bang —Saturday fireworks — for several years and decided that the 30th anniversary was the time to do it. Fireworks two nights, a free lumberjack show, a giant sand sculpture, the return of Bingo, what is billed as the best entertainment package ever and much more at the festival means a memorable weekend for all. Best of all, admission continues to be free for the summer event. Because of business sponsorships, the festival will offer to all who wish to attend three free stages of entertainment, crafts, children’s activities, a major parade, a Miss America local preliminary pageant and more. Organizers are inviting visitors to come for a “Staycation” weekend and to enjoy the many facets of the festival — again, with no admission charge.

Held in the charming Village of Blissfield, the festival continues to grow each year. While the committee worried about the rising River Raisin, due to all the rain, the river never broke the banks and just a few adjustments in where things would take place were made to accommodate areas where the ground was too soft or wet for activities.

The festival grounds are just south of U.S. 223 at the three bridges (actually, there are now four bridges in succession over the River Raisin), and west of the downtown area. However, it isn’t just a party (though a grand party it definitely is), but it’s also an important cog in the charitable wheel of this unique community. Many organizations, clubs and churches raise significant percentages of their funds with activities, raffles, drawings and more during festival weekend. The theme of “Magical History Tour: 30 Festive Years” was chosen to pay homage to the past by bringing back some favorites — Bingo, hosted by the Blissfield Athletic Booster; a Saturday noon Chicken BBQ; and a lumberjack competition, the Great Lakes Timber Show along with the annual favorites people expect — and adding some exciting new activities including three amazing bands Thursday, Friday and Saturday nights on the Pavilion Stage; a sand sculptor who transforms giant piles of sand into works of art over the week; and moving the Car and Bike Show from Sunday’s intense midday heat to a late-day event when the cool breezes off the River Raisin provide a more comfortable setting and an outdoor movie on the big screen.